Lettuce and radishes to go

July 4 is, of course, Independence Day in the US. This particular day was also an independence day for me: it was the day the lettuce and radishes got big enough to eat. 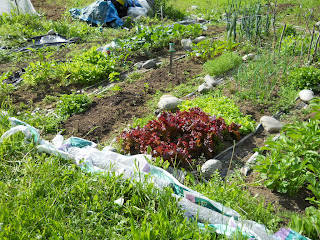 Lettuce, red and green, in the center; radishes (seeded) far left. None of the radish transplants really worked; too late into the ground -- lost one gamble there. There is no comparison between homegrown lettuce and the stuff they sell at the grocery -- imported, of course, from the lower 48 -- a different veggie entirely. Likewise or double for store-bought radishes. I don't eat them. Might as well eat newspaper. Might even be more nutritious. So, for a while, I am independent of the grocery store. But I have run out of potatoes; I eat my own potatoes all winter but alas, I had to expend most of what was left as seed stock.

In the new Greenhouse 2.0 the tomatoes are doing well. We have more sunlight this year and less rain. Hose time! Water them plants. Also our zucchini appear to be progressing, after the usual shock of transplanting. GH 2.0 is a big improvement on 1.0, I must say.

In the background you can see the leeks, which, as I said before , survived the winter. If I can manage leeks in Alaska, I will be very proud of myself. My artichokes are doing nicely, but I think they may not mature. They have to be forced early, and maybe I wasn't early enough. But, as I have said, and so have many others, agriculture is one big gamble.

And as a final agricultural update, my lentils (planted from 100% grocery store lentils, cheap) have come up and are growing. I spent a couple hours weeding them and they look very nice. I actually grew lentils this winter in a yogurt container, using a trouble-light as a UV source. I know, wrong spectrum. But it worked. When the plant collapsed it produced six or so lentils. However, as an experiment it was a very worthwhile effort. I love lentils. High protein vegetable. Easy to cook, unlike beans.
Posted by JRC at 6:24 PM