It has been raining cats and dogs. Or in Spanish, always more colorful, palos de escoba  y capuchinos de bronce. Brooomsticks and bronze capuchins. I assume capuchin Friars made out of bronze are extremely heavy. So with the rains. So since I can't go out and weed without getting soaked I have been doing some clock  stuff.

This time we will make a pendulum. The pendulum is an antique device. Galileo was the first person to document its workings, but it must have been known before that, because Galileo, smart as he was, did not invent it and never claimed he did. However, he did scope it out. He worked out the basic pendulum formula, which you can find anywhere and I will not repeat it. It is a curious fact that a pendulum with a one meter length will do a beat (the "tick" of "tick-tock") in one second. Almost. When the Frenchmen of the 18th century invented the so-called metric system (it should properly be called the decimal metric system) they considered using the length of a pendulum that beat one second as the length standard. They wisely rejected this, because they realized their time-keeping devices were crude. Instead they took a ten millionth of the Earth quarter-meridian as a length unit, AKA meter, and proceeded to measure out the length of the meridian -- a monumental undertaking by any standard. Especially during the Revolution, when surveyors were regarded as spies.

But we digress. Let us make a pendulum for the clock. We are fortunate that the major part of this is simply a commercial three-foot dowel from Lowe's. But a pendulum needs a bob. This is a heavy piece on the end of the dowel. I was fortunate to secure an offcut from one of John's projects, a piece of oak, intended as a stair riser. After a lot of staring at the drawings I finally figured it out (I think) and decided I needed a circle 80mm in diameter. So I got an offcut, marked out 80mm with dividers, and roughed it out on the bandsaw. Now we have to get it circular. This is lathe work, of course. You will soon find that if you need A you firt have to make B. In this case B turned out to be an arbor (lathespeak and not clockspeak) to hold the piece you need to machine. This took me an afternoon, but I do not feel bad about it because (a) I have an arbor for the future and (b) I learned a lot. I used a piece of very nice steel rod, taken from a defunct printer, to make the arbor. So let's put it on the lathe. 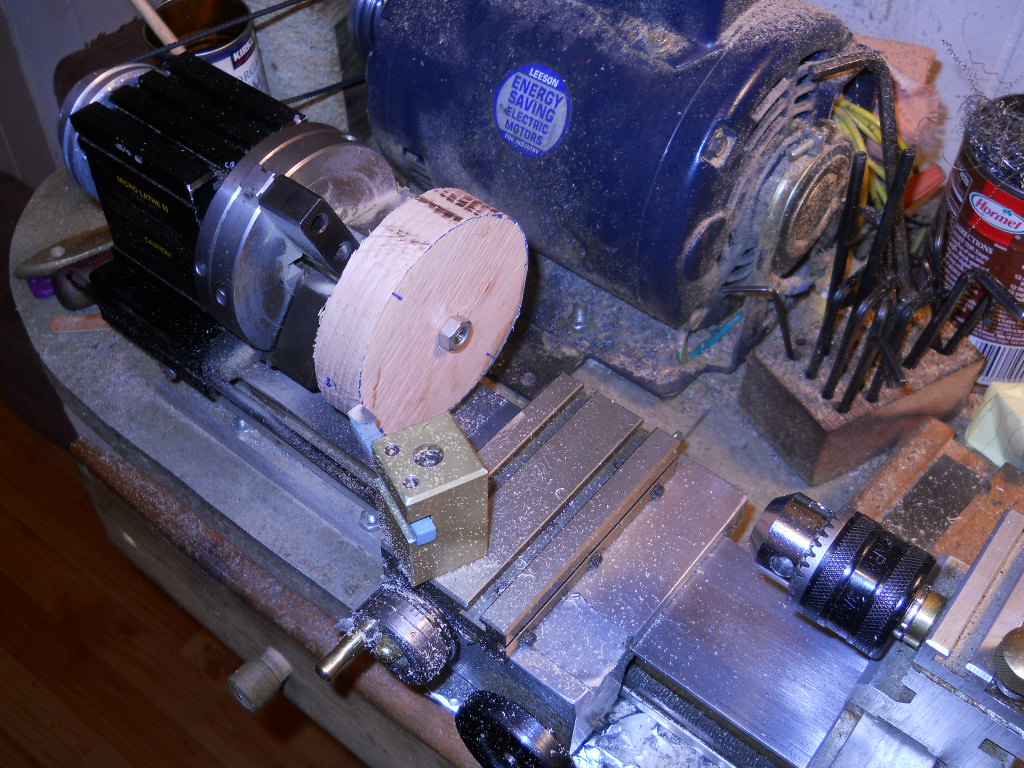 The Taig lathe will "swing" a maximum of about 110 mm -- that is the center height is 55mm  or so(actually 2.25"). It is an RGU lathe. The bob is very close to the limit of the lathe. Wood or no. It is not only the swing, it is getting the tool to work. It took quite a lot of maneuvering with angles, tools, and general fussing around to get it down to where I wanted it, 80 mm diameter.

At the end, we turned the thing. It remained to drill a hole 1/4" through it. This was a major undertaking. A "jobber's length" 1/4" drill can do the job. Barely. My drill press can drill 50 mm , but it is outclassed  by the 80 mm diameter. I finished it up with a cordless. And no drill goes straight, nor round.  More about this some other time.

So here's the pendulum: 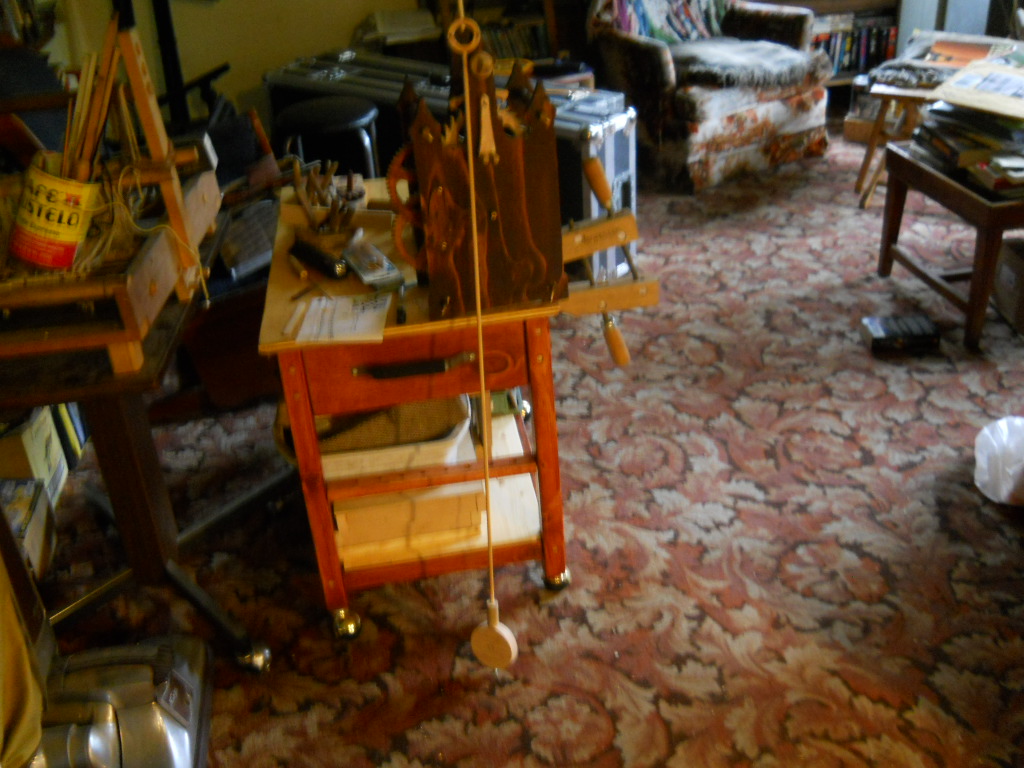 The pivot is the circle on top. Then the 3' (about 94cm) rod, then a sleeve, and then a piece of hardware store threaded rod, below of which sits our bob. I will have to make up a stand, because as you can see, the pendulum is too long to clear the cart which John built for me. It's a few cm, that's all. Not too bad for a couple of rainy days. The reason for the threaded rod is rating. By adjusting the nut at the bottom of the whole thing you can adjust the beat to accomodate friction, weather, and other misfortunes.
Posted by JRC at 10:04 PM
Labels: Wooden Clock