So when I went and skied to the Iditarod, a post ot two ago, I did not ski any longer than I usually do. Thing is, I cooled off in the middle. And the snow was so nice coming back that I went all out. Disaster. My legs hurt and due to all the complications of old age and the rather convoluted human nervous system, I hurt. A lot. So I have not been skiing until today, almost a week. Instead, I walk. I am learning to toe in. Thanks to some very clever therapists, I can walk without my back aching. All I have to do is toe in! Try it sometime. American Indians toed in; in fact they could tell whether tracks were made by palefaces or one of their own kind . Most Europeans toe out. Guaranteed to give you backache in your old age. So I am learning to walk again, strange though it may sound. So out I went to what I call "Polushkin Pond," retracing my ski route. And there he was... 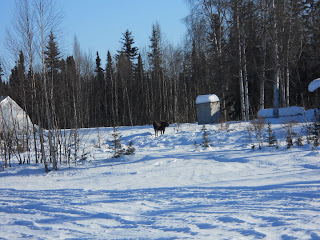 Aloysius X. Moose, browsing on the ur-Reutov birches (or alders). Totally unconcerned. Now mind you, I have moose tracks one meter from my house, but they are nocturnal tracks. Seldom do you see them in the daytime. Now how do I know that it is probably "he" and not "she?" Well, the ladies are usually accompanied by calves. No kids? Probably a male. Also, the attitude. Females will usually vanish. Protect offspring at all costs, even interrupt a tasty meal. Not the blokes. Their attitude is "if you get any closer I'll stomp on you. Now go away!" Not wishing to be stomped on, much less interrupt a moose at breakfast, away I went. By the way, Aloysius is probably either Ricky or Racky. Those are my two resident males. In the fall, they pal around together, with their splendid racks of horns. Racky's rack is a bit bigger than Ricky's.

In other climes, March is spring. Things start to bloom. But my driveway is still rather snowbound: 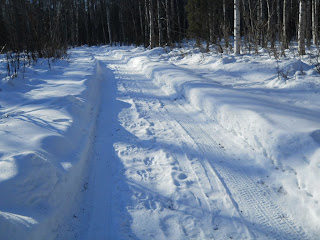 Car tracks outside, ski tracks in the middle! This is actually not my driveway. It is a road, known to the Beneficient Bureaucracy of the Mat-Su borough as "North Basargin Circle." I cannot understand this. It is not a circle. Not even approximately. Perhaps the Russians who cut the road were conversant with Lobachevsky's geometry, where circles can become straight lines. It goes the wrong way to be North. You are looking South in the picture. Not even Lobachevsky can get away with that. However, the beneficient bureaucrats regard it as a "private road" and don't clear it. So I have to do it myself or I can't get in. My driveway actually starts where the picture ends. Bless all bureaucrats. May they spend their time in the afterlife shovelling snow in Jehannum. Dear me. Maybe it's too hot in Jehannum for snow. Never mind, if Dante could imagine many Hells then I will imagine one where bureaucrats get to shovel snow. Politicians will go there too. They will shovel snow with garden trowels.
Posted by JRC at 7:21 PM
Labels: Moose, walk, winter