Time for that great Alaska Classic, the Iditarod. I have posted a lot on this, but this year I did something completely different: I skied out to it! I discovered a shortcut via the frozen village pond. So off I went on skis. I carried a backpack with a thermos of tea and a spare vest in case I got really cold. Over the pond, through a clearing, gap in the trees, and you're there! Half an hour after I left home, I was there. The usual snow machine (Satan Sled) folk festival was underway. 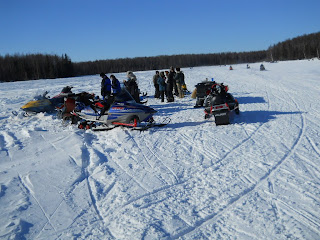 The race goes from Anchorage to Nome. But they truck everyone up to Willow for a restart; they used to do it in Wasilla but this city has urban-heat islanded itself out of business. In spite of my prejudices against Satan Sleds, these people were very nice and offered me some very nice smoked salmon with cream cheese and crackers!

Restart was at 2PM. Thanks to my friendly neighbors, who had a program, I knew ahead of time who was who. The first musher through was the legendary Deedee Jonrowe, won twice, overcame cancer, wears a trademark pink parka. 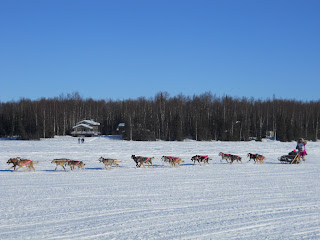 We all cheered! She waves back; as any good star, she values her fans! One of the problems I had in this episode was the camera. It worked perfectly. But I cleverly put the sun at my back. No sun in my lens! Yes, but I had great difficulty seeing the screen. Sun at my back, sure enough. On top of this I had to take off my gloves to operate the darn camera. Hands froze. It wasn't that cold, maybe -5C, but that will still freeze your hands, and I kept pressing the "off" button instead of the shutter. But there are some good shots. 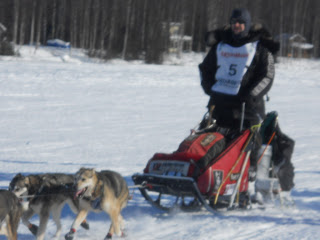 The dogs look happy, don't they? They seem to love to pull. These are huge teams at this stage, because attrition will set in; no substitutes allowed in this game. One more musher shot... 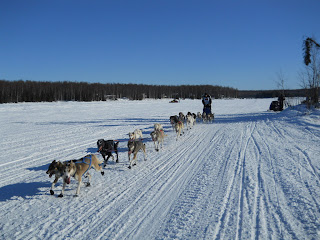 And then it's time for the clown act. One musher stopped right in the middle of the track and gave his dogs a snack. 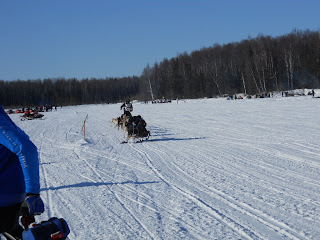 Well, maybe he forgot to do it in Willow! Who knows. Dogs really appreciate the snacks; they are burning up an enormous amount of calories. 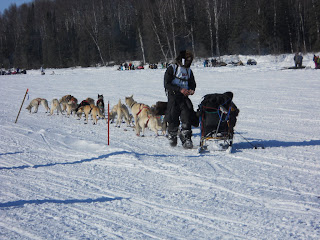 Note the leader. He (or she) let his/her snack go on the ground and is nibbling around it! And so it goes. One last musher shot, this one with elegant pink booties on the dogs. 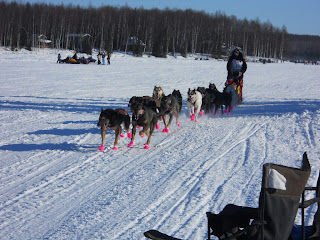 Then there was the musher from Jamaica. A most unusual origin for a musher. That was one of shots where I pressed "off" instead of the shutter. I plead cold hands, your Honor. We all cheered him on. And the guy on a bicycle! Really fat tires, too. Tracking along with the dogs. Wonder if he goes all the way to Nome?

OK, time to go home. An hour's ski all told, my usual daily workout; but the middle of the workout was most unusual.

In the old days it took 20 days to get from Anchorage to Nome. Nowadays they do it in a little over eight! 1,600 Km, circa 1000 miles. Part of the reason is that now there is the "Tin Dog" Iditarod, Anchorage-Nome on Satan Sleds. They pack the track, so the going is much easier on the dogs. Don't approve of it, but it is out of my control.
Posted by JRC at 7:18 PM
Labels: dogs, Iditarod