Once again we have arrived at secret project time. These are projects that are destined as gifts for someone who may be reading this blog. It is a whole tableau, but of course I cannot tell you what it is. However, a piece of it has turned out to be quite the Odyssey, so I'll post it now. The thing is, I have to make four wagon wheels. (They are not "wagon" wheels but let that pass). Two of them are 50mm across and the other two are 40mm. Not very big.

I was misled by the ease which I made the spinning wheel. But that has six spokes and a very thin alder rim. Well, on with life. The spokes are made on the drawplate. You have seen drawplate before so I won't waste bandwidth reposting it. They are 2.5 mm diameter. The next job was to make the hubs of the wheels. 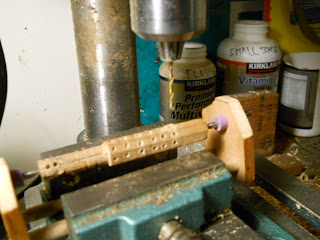 I took a piece of mahoganoid ex-table top and sawed out a rectangular piece. Then I planed it down to an octagon. The octagon is 8mm across flats. The first idea I had was to turn it down to 6mm on the Taig, easy enough; but getting the holes for the spokes in it was a nightmare. That's the left end of the piece above. Kept chipping out. No. No round hubs. We'll go with 8mm octagons! So I cobbled up the fixture in the picture. I call it the dividing fixture-future nanolathe. It will come up again. The centers are broken moto-tool drill bits. It is very easy to break a #80 Morse drill. With this fixture, holding by hand, I could drill out the spoke holes. 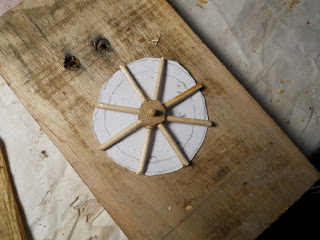 And there are the hub and spokes. The piece of paper is the beginning of an evolved jig. So the next step is the rims. Steam bent. At this point I figured out how to use the pressure cooker that I picked up at the thrift store for ten bucks. Amazing! Three minutes; you're done. Saves gas. Saves time. And it even cooks! So I took some pieces of lilac and planed them 2x5 mm. Tedious. Steam them, dig out every small clamp you own: 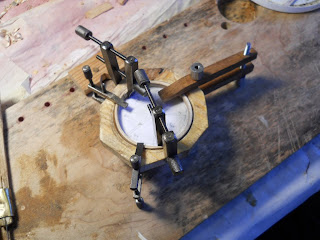 Notice that the jig has evolved from a piece of paper to a wheeling jig. I bored it out on the Taig (and it needs to be rebuilt) but it was much better than nothing. There are two pieces to these wheels, three for the small ones. It proved impossible to bend 2mm thick stuff into a circle 50mm diameter. Crack! Broken. Maybe alder next time.

The next job is to drill the thing. Mr Gerald Wingrove does this in his sleep, but I am a lot less skilled. Also his jigs are a lot more elaborate! I now see why. The jig allows me to mark out the positions of the spokes. Then I spot each hole with an awl (another broken #50 Morse drill bit) and drill on the drill press, after painstaking alignement in the drill press vise. Big wheels are built in segments called fellowes, but this might be even more work for me. The rims have to be scarfed at the joints; more painstaking work. However, at the end... 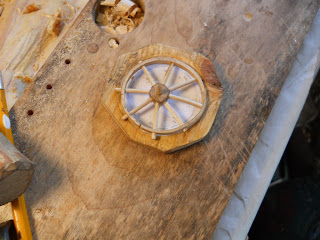 We have a wheel! Spokes need to be trimmed up, of course. Naturally, lessons have been learned. Mr Wingrve's elaborate jigs are just the thing. Save trouble in the long run. However, I am not sure that I will start turning out wheels en masse, but if I do I will certainly rethink the jigging.

The word "jig" is a curious one in English. For one thing, it is a dance; for another it is a way to fish; third is my usage -- a contraption to hold things put while you work on them, although the word fixture is also used for this. If it is a dance, the word probably comes from MF guige, as in the Jig Fugue by J.S. Bach. I am quite sure Johann S. did not have wood or metal working in mind when he wrote that.
Posted by JRC at 6:10 PM
Labels: miniatures, tableau, wheels