I am at the end game stage on the secret project. All will be revealed very soon. But in the meantime I have acquired a new tool, a portable bandsaw. He has been named Handy Bandy. Handy is an asiatic tool. I got him for cheap at my favorite pawnshop, brand-new. 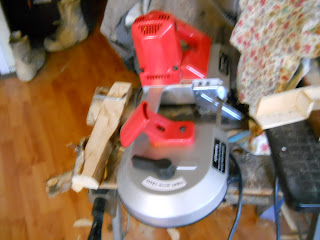 I had two things in mind when I acquired Bandy: winter use to hack out carving blocks and all the things I have to do this summer. Bandy is a weird contraption. The blade is twisted 50 degrees from the vertical (or horizontal depending on what you take for a reference). The boade actually twists by that amount. The instruction manual borders on the pitiful. No, it is pitiful. It is written in English, and its syntax is impeccable. It is the information content (none) to which I object. The net is not much better, it tells you how to cut pipe with a portable bandsaw and that's it. But what I want to do is rip branches anywhere up to 10cm diameter into rectangles. And indeed I have, witness the slab at the left of the picture. It took about five minutes -- it is an hour's worth of ripping by hand. Somehow, in spite of my hatred of power tools, I find this might have its advantages.

Of course, I started out macho freehand. None of these snapped chalk lines for us. Just press the trigger and go. The saw will immediately jam up against the work on the left side. It is very powerful, Superman would have his hands full (or, if you prefer, Wonder Woman would have her work, so to speak, cut out for her). After a while, I found out that the strangely shaped piece of steel in the plastic bag, along with two anonymous screws, is a blade guide. It gives you a reference. The blade on this saw has a weird twist, 50 deg. per "manual." The blade is actually twisted by that amount. The guide also helps you keep the saw sliding along the work. So I screwed the guide on. The saw is still a difficult customer to control. I persevered -- and then the blade stopped. Motor ran, but blade did not.

So I took Bandy apart, and found some weird stuff. Bandsaws have two wheels, the tractive wheel and the idler wheel. They also have guides, thrust bearings, and other stuff. The wheels and guides were immediately recognizable. But the wheels are sections of a cone. This is all due to the fifty degree twist in the blade. None of this stuff, except the tension, is adjustable, as far as I can tell. Oh yes, and the "tire" had come off one of the wheels. The tire is a rubberlike belt on which the blade is pulled. So I put it back. I cut some more wood, and it jammed up again. And again.

So now I have to figure out how the tires are put on the wheels. On a real bandsaw they are either cemented on (old-fashioned!) or made out of some stuff that you boil in water and expand. Then, while hot, you slip it over the wheel. When it cools, it by George will stay put. Shrink-wrapped, in fact. This saw is none of the above. But the tire has a skirt. I suspect the skirt has to be pinched by the wheel. Tomorrow I will have to take the wheel off. It is held by an Allen bolt. So we will see if the anonymous Allen wrench that came with this device will fit it. If it doesen't I have all kinds of Allen wrenches in the shop. But that's the ice axe and snow shovel to get in!

Meanwhile, I have found out that the way to rip is vertically. Clamp the piece in the workmate and saw straight down. However, you have to take off all knots, limbs, and protrusions on your left side with an axe. Else the saw jams against them. We all learn by doing. Stay tuned to the further adventures of Handy Bandy.

But why in Hades did they twist the blade fifty degrees?????
Posted by JRC at 7:35 PM
Labels: portable bandsaw, tools