The recipient of the secret project is now aware of my intentions, so all can be leaked. The project (which will take a long time, spring is here) is a tableau for my doctor. I am transposing (translating?) her practice back to the year 1910 or so. Now, the first thing a doctor would need in 1910, in rural practice, is a Doctor Buggy. In those days the doctor went to the patient, not vice-versa. I did my homework and learned a lot about carriages. There are all sorts of styles. There are phaetons, victorias, sulkies, dogcarts, landaus, coaches... the list is almost infinite. But the favorite vehicle of the rural doctor was a Doctor Buggy. Much to my surprise, you can still buy these things, in full size. Some restored, and some new. Some people are still building buggies! Of course, you need a horse to go with it, but provided you can feed Dobbin in the winter you are immune to gas prices. Here is the prototype: 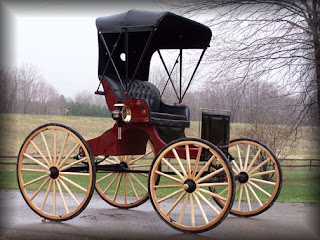 I shamelessly stole this image off the 'net. Handsome, isn't it? If you google on "doctor buggy" you will be overwhelmed with images. Note that the front wheels are definitely smaller than the rears; why this may be I wot not. It caused headaches.

So now the question is how to build this thing. In everything I read, not one dimension was mentioned. Scale drawings not possible. So I went about this another way. I built a cardboard prototype, with barbecue skewers for the wooden parts. Here is version 0.0: 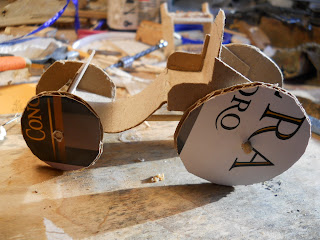 Now you know what the wheels are for! My next step was to unearth the Amazing Skeletor. I have mentioned him before. He is a barbecue skewer-and-wire mannequin, to a scale that all my tableaux follow. It is about 30:1 -- 1 unit tableau = 30 units full size. Why? I dunno. I feel comfortable at that scale. It is very small by model-builder's standards, who like 20:1 or 24:1, or 12:1. When I put Skeletor in the driver's seat, it was obvious that the ramp between seat and front was much too large. Nice thing about cardboard, you cut it with scissors and paste it up. After some experimenting, we came up with v1.0: 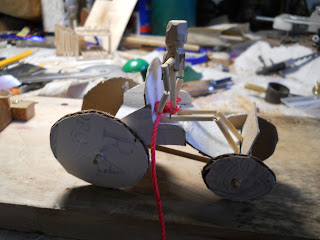 Ahhh. Sleletor looks quite comfortable. By george, we've got it! The next step was to build the chassis, or "running gear" might be the proper term. 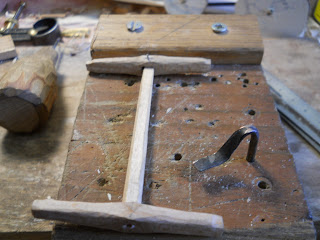 Compared to the wheels, this was the proverbial piece of cake. But the front axle swivels, just as in the prototype. Note the piece of wire sticking out of the front axle. This is where the spring fits in. (It is also the swivel for the front wheels.) If you look at the prototype, you will see that the body is attached to the springs and the springs to the running gear. It is a suspension, in fact, with no shock absorbers.

Making this buggy was a two-month job. So I will split the posts on it. The wheels took by far the lion's share of this odyssey. The bodywork was much easier, and I'll post it later. And I'll tell you about the springs, which were much harder than I had anticipated. This is because proto-buggy, v1.0, has springs bent out of beer can material. Very easy to bend. Lots of flex. Not so steel! So stay tuned for Doctor Buggy, episode II, on this channel.
Posted by JRC at 6:38 PM
Labels: doctor buggy, miniature, tableau