When I first came to Chalupy almost a decade ago, I spent the first summer making a bunch of stuff inspired by Drew Langsner's Country Woodcraft, unfortunately out of print. One of these projects was a wheelbarrow that Drew used for hauling wood. I built a copy with a modified wheel arrangement. Drew used a solid steel wheel and a rod for an axle. Such wheels are not obtainable in Alaska, so I used a wheel from a kid's bike thrown out in the trash. 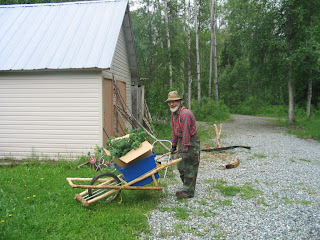 I posted on this very early in the blog. Archeology, really, as blogs go. I called this guy the birchbarrow. I learned a lot from my mistakes. The barrow was too wide for firewood transportation. For that job, you need a narrow barrow. And behold, the season for firewood transport is upon us, and we are very lucky not to have been snowed in! So I had to build the barrow again from scratch. The first job is to put together the lower "stretcher" that holds the wheel. 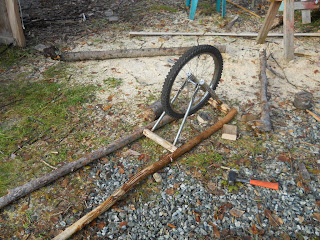 My system of wheel mounting is radically different from Mr Langsner's original. When you use bicycle wheels, the axles are very short, and unless you could find 8mm threaded rod somewhere, you can't extend the axle. So I used the original fork, and made backstays out of castoff steel pipe. This baby is nailed together. No time to make mortise-and-tenon joints. It requires you to drill three holes, a big one for the fork and two small ones for the backstays.

Next job, nail together a second stretcher, a bit wider than the first. It will go outside the first stretcher. That gives you the width. 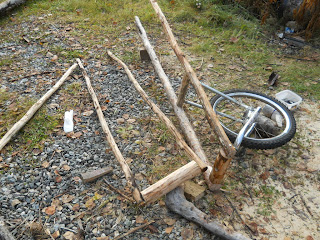 All poles are peeled. The intention is to paint them with old motor oil, not esthetic but good weatherproofing. Fit the outer stretcher, which you just made, over the inner one, nail on some cross-braces, and you have the semblance of a barrow. 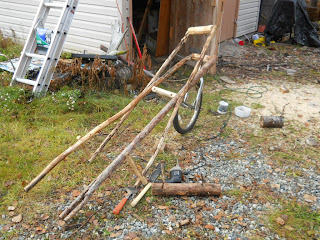 OK, obviously need longer crossbraces. I was getting tired and it was time to quit -- or else you start making too many mistakes. So next day I went out, and nailed up some longer crossbraces, and put some wood on it. Voila: 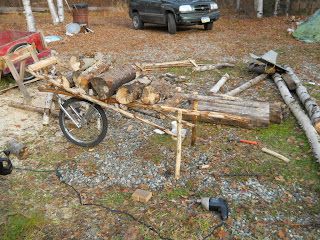 It, or I, handled the load with ease. Some operational adjustments are in order. It flexes a bit too much; a bit more cross-bracing is needed. But it will handle quite a lot of wood. Drew's version handles 200 lb or 100 Kg of wood. That is a lot more than you can lift by arm! Handles too long. Easy fix. On the whole, I'm quite pleased. I took absolutly no measurements. All done by eye. All poles I had lying about. I have named barrow Luggy Freelance. If you are a Sluggy Freelance fan, you may get the reference. If not, doesen't matter!
Posted by JRC at 6:53 PM
Labels: barrow, birchbarrow