The woodshed, my main concern for this fall, is almost complete (as Darth Vader would no doubt say). But there remains the roofing. Now, many years ago, there was a family homestead a bit beyond my driveway. The original homesteaders, according to what I have been told, came to an untimely end in an automotive accident. Their house degraded with time and eventually was pulled down by the surviving villagers. I call it the Ghost House. The villagers salvaged what they could, or wanted. The roofing was piled up willy-nilly and has sat there, perhaps 20 years. Well, said I, an ideal source of roofing for the woodshed. So several days ago, I went up to the Ghost House to see what I could salvage. I immediately ran into a problem: the stuff is piled up like jackstraws, wth one big sheet of "tin" (actually galvanized steel) pinching another. Each sheet weighs perhaps 25 Kg or if you must, about 50 lb. You can muscle it about. But it has no handles, and is very hard to manage. If it is pinched by another piece, it is impossible to move it. (For me, anyway. If you are Superman, ignore this.) A quarter century of leaf mold on top of the top pieces. Couldn't budge anything. So I went home and thought about it. Finally the solution appeared. 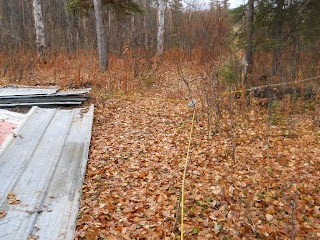 The solution to the jackstraws problem is not so hard. Tie a wire loop to the top piece. Last year at a yard sale I found a big pulley for about $2.00. The yellow rope goes from wire loop to pulley to car. The pulley is tied to a convenient tree. It makes the pull straight, parallel to the way the tin is piled. Rev up the car, and Bob's your uncle (remarkable phrase, that. Wonder where it comes from). Out it comes. I had to use the pulley trick several times, but eventually I fished out five sheets of tin (galvanized steel, as I said but people speak of "tin" roofs). The same trick can be used to pull logs around corners, or move heavy objects when the pull is at odd angles to the direction of pull.

Then I pulled the whole lot home. Alas, not without a casualty: at some point I drove over a sharp object and got a flat tire. The cost of fixing the flat must be added to the cost of the woodshed. I think so far we are a gallon of gasoline for the chainsaw, about ten dollar's worth of nails, and of course an awful lot of labor. A flat can be fixed for about $15-30 if you don't do it yourself, so on the whole I think the woodshed is a marvel of self-sufficiency. The flat tire will be the most expensive single item in the woodshed.

Quantum mechanics is fascinating. I love it. But for woods use, good old Physics 101, "Simple Machines" such as levers and pulleys is far more useful!
Posted by JRC at 7:23 PM
Labels: useful tricks, woodshed